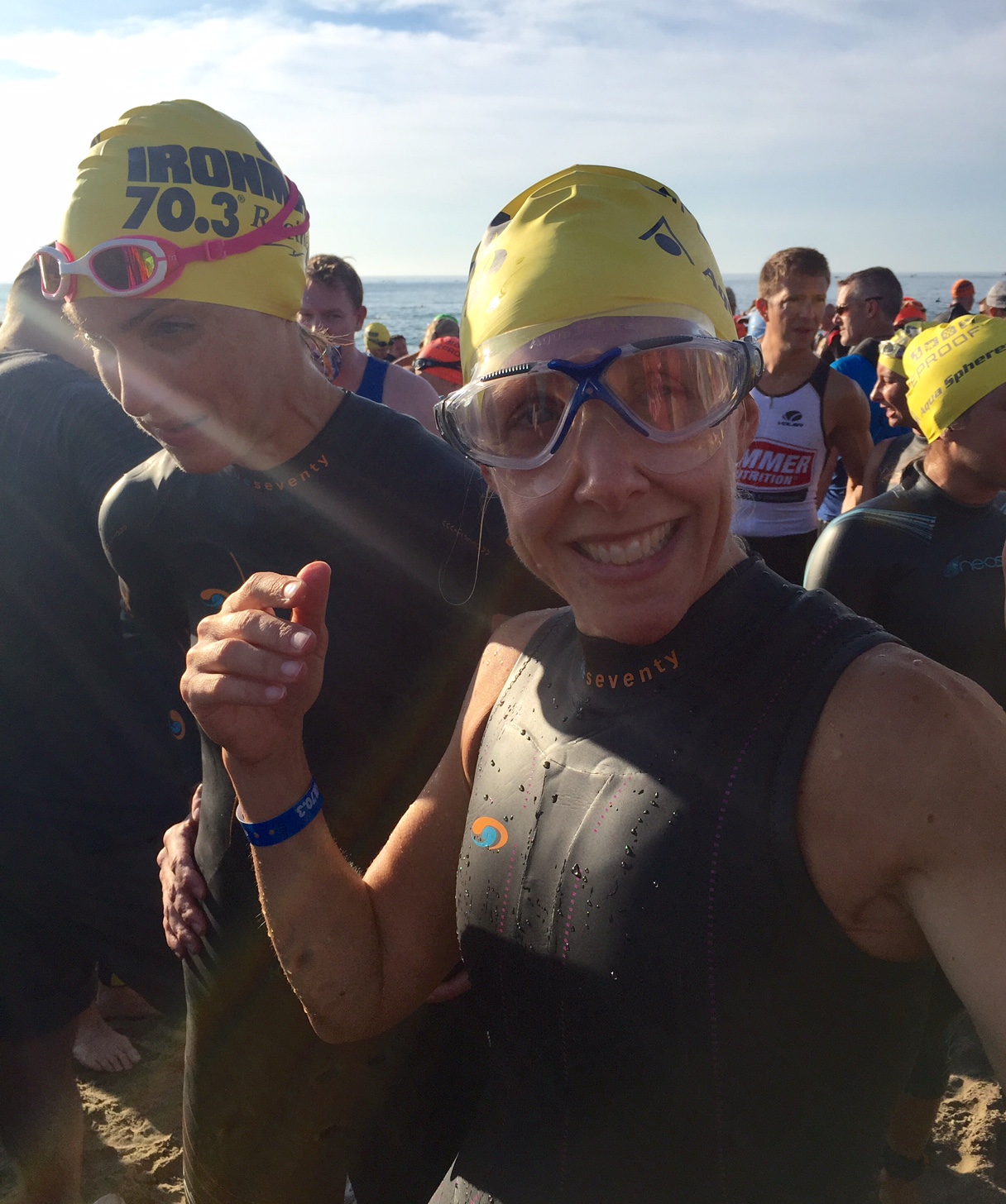 For the last 16-weeks I have put in my training miles to compete in a half Ironman triathlon on July 19. A half Ironman consists of a 1.2 mile swim, 56 mile bike and 13.1 mile run. The last time I completed this distance tri was back in 2008, the year I was married, and before trying to start our family. I was both excited and a little nervous to return to this distance. While I very much enjoy triathlons, a part of me wanted to prove to myself that I am still an endurance athlete.

My training season was a roller coaster ride, filled with highs and lows and some steady straights. I had a least one break-through workout during swim training, conquered a tough bike course in Madison, and pulled through a 14-mile long run feeling strong. But, like many triathletes, I also managed many aches and pains in my body as my training volume increased over the last two months.

The week leading into the race, I got myself to bed early and kept pushing fluids to stay ahead of the heat and humidity that rolled through the Midwest. I spent the week gradually packing my gear and all the accessories that go along with triathlons. My husband has been my biggest supporter, and took the lead as my ‘equipment manager’ and support crew on race day. The boys would stay with Nana for the weekend. 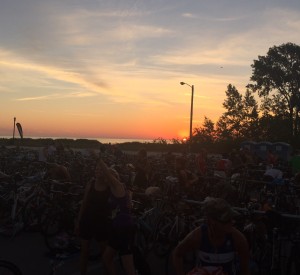 Race day rolled around quickly. My day began at 4am, and immediately started to fill my body with more carbs and water. We left our hotel room as the sun began to rise and made our way to North Park beach in Racine. It was already 71 degrees at 5:30am, the humidity was noticeable but not stifling. The day’s forecast called for mostly sunny skies and a high of 85 degrees – pretty steamy for any outdoor activity. 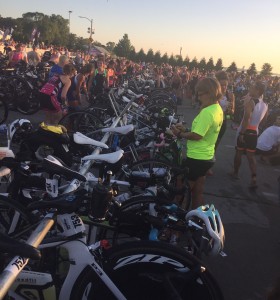 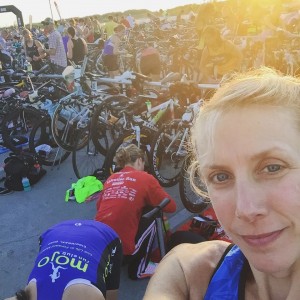 Once at the beach, I set up my transition area with 2,044 other triathletes. The air was filled with excitement and nervous anticipation. As we gathered for a group photo, the coaches from my triathlon club, Chicago Endurance Sports gave us one last pep talk. “Go out there and have fun!” 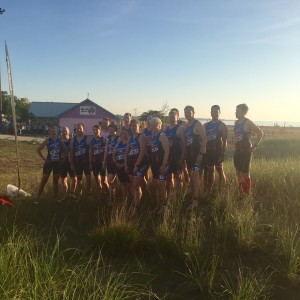 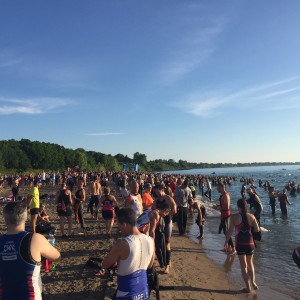 After photos we started the one-mile trek down the beach to the swim start. It was a point-to-point swim in chilly 60-degree Lake Michigan. The swim is not a strong event for me. I’m a middle-of-the-packer on the swim, but I can hold my own for the distance. 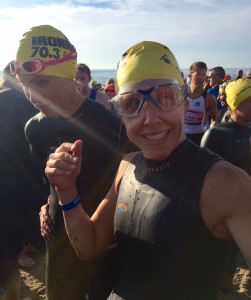 The race officially began at 7am with the pros going out first. After the pros, the age-group waves went off every couple of minutes. I was fortunate; my age group wave was #7, and scheduled to leave at 7:20am. The last wave left at 8:30am. The staggered start, unlike a full Ironman triathlon, breaks up the congestion that can build in transition and on the race course.

At 7:18am they called wave #7 into the water. This is definitely the hardest part of a triathlon for me, the anticipation of submerging into the chilly water and swimming like heck with 96 other women kept my nervous energy high. I decided to position myself slightly in the middle of the group. The horn went off and away we went. 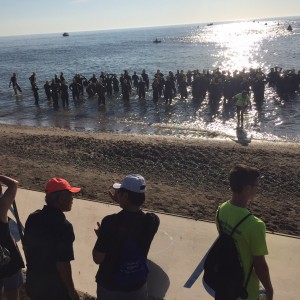 The water was cold – really cold – especially with a sleeveless wetsuit on. Brrr. During the training season I learned to focus on an aggressively exhale in the water – lots of bubbles. It’s paramount so I don’t feel as disoriented when I finish the swim. So that’s what I focused on as I settled into my stroke, and my nerves settled too. I was having a good swim, and felt strong the whole way through. Unlike my last triathlon, my googles didn’t fog up so I was having more success sighting. About three quarters of the way through the swim, I noticed the water was getting choppy and as a result I took in more fluids… of Lake Michigan.

My goal was to get out of the water in 40 minutes. I hit my interval timer when I stepped onto the beach and was pleasantly surprised to see on my watch, 38:37 minutes! Wawho! It was one of my best 1.2 mile swims! 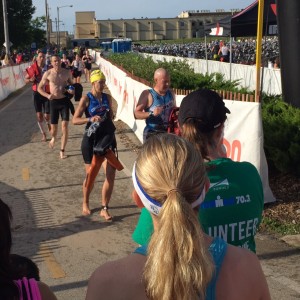 The transition from the beach exit to the transition area was a long run, longer than most. But the long run was worth it when I saw wetsuit strippers. Yes, there were volunteers who stripped off my wetsuit. This is a GREAT day indeed! I’m having fun and now I get to ride. I changed into my bike cleats and helmet as fast as I could and ran with my bike to the exit. There was my support crew! My husband was cheering me on as I departed. 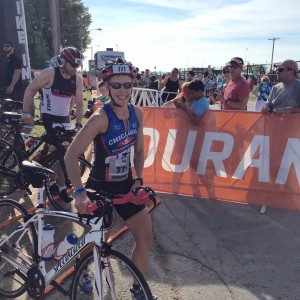 I mounted my bike with ease and sped up the little hill leading out to the course. I was now super excited about the day — one event down, two to go. The bike is my strongest event. I enjoy riding and feel confident on the bike. The course is flat and fast. My goal time for the bike was 2:45:00 or better, roughly a 20mph pace.

About 25 miles into the ride I started to take inventory of my body parts. Admittedly I was not giving 100% effort on the first half of the ride. I was cautious not to go out too fast, afraid that I may lock up my legs like I did during my ‘warm-up’ triathlon three weeks earlier. I was happy that my body was feeling good, but not thrilled to feel the very strong southwest wind blowing. The wind was taking everyone by surprise – definitely not the 9-12 mph breeze they forecasted.

I decided around mile 35 that I needed to pick up my pace. It’s much easier to make up time on the bike than it is on the run. I ended up finishing the bike in 2:48:59…a few minutes slower than anticipated, at a 19.9mph pace. 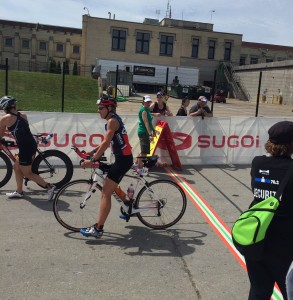 My bike to run transitions was one of my fastest, 1:53. I was happy and a little shocked to see that the bike rack in my row was practically empty, which meant that I was one of the first in my age group to come in from the 56-mile ride. I laced up my sneakers, grabbed my running cap, and hustled away. 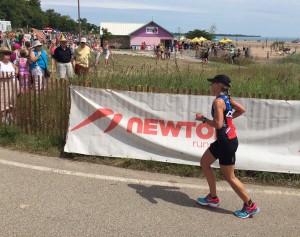 As I hit the pavement, I did another body part check. Yes, the legs feel a little heavy but nothing is screaming at me. It always feel like you’re running in slow motion when you come off the bike, so I was anxious to hit the first mile marker to check-in with my pace. I needed to hold an 8:30 minute/mile pace or better to make my time goal.

First mile came in at 8:26, second mile 8:28, third mile 8:40, and that included a brief water stop. I was excited about my pace, but I was working much to hard to be able to endure it for another nine miles in the heat. By the third aid station I was walking 20-30 seconds to take in fluids and cool myself down. The heat was just too much. At that point, I stopped looking at my watch and decided I needed to run by exertion level. 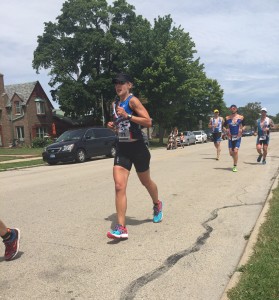 The run course was two loops and I got a psychological boost after I finished my first loop and saw my husband and tri club coaches. I was now heading into the home stretch. My brief stops through the aid stations were becoming less brief. Again taking inventory of my body around mile eight, everything felt relatively okay. I was exhausted and hot, but had no acute pain. It was only the heat and my mental demons and negotiations that hindered a brisk forward locomotion.

My strategy became simple; run my best to the next aid station, walk to hydrate and then run to the next. I was on a mission to finish with one mile left, and the last mile included a down hill run towards the finish line. As I approached the downhill descent I came upon another women in my age group in front of me. (In triathlons, your age is marked on the back of your calf so everyone knows who they’re competing against!) I thought for a moment about my strategy and decided to pick up my pace to pass her with about 200 yards to go. I gave everything I had left to cross the line. With 10 feet to go, that 41-year old jetted pass to finish in front of me. Good for her. We both gave 100% for the finish! I looked at my watch as I crossed the line and was pleased to see 5:33:19. 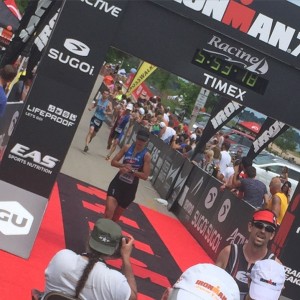 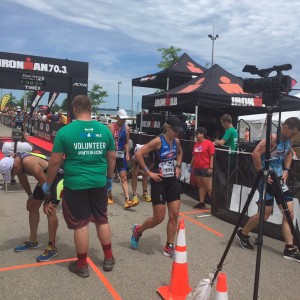 I was completely, utterly spent. I had no energy to lift my arms in the air for my victory. I just wanted to stop moving. What a day. I ambled through the finish line shoot to greet my fabulous husband. One ice pack and two cans of full-sugar soda later, I pepped up like a flower in sunlight. Only in hindsight can I say it was a ‘fun’ day. It was a hard day. And it was totally worth it to feel such a sense of accomplishment to cross that line. Yes, I am still an endurance athlete, and I’m getting better with age.

I was anxious to look up my official finish time and standings when I got home. Yes, if you haven’t gathered, I am competitive.

Overall I finished 11 in my age group out of 96 women! And the 86 female to cross the finish line that day. It may not have been a day to set a personal record, but I’m more than happy with my accomplishment.

Thank you for taking the time to read my narrative.

“There is no substitute for a race to bring out the true demons of self-doubt and the angels of motivation that will get you to the finish line.”

For anyone in the Chicago area looking for top-notch coaching and camaraderie to train for your first or tenth running or triathlon event, I highly suggest Chicago Endurance Sports. Their program is the best the city has to offer.

My Favorite Things About Group Training