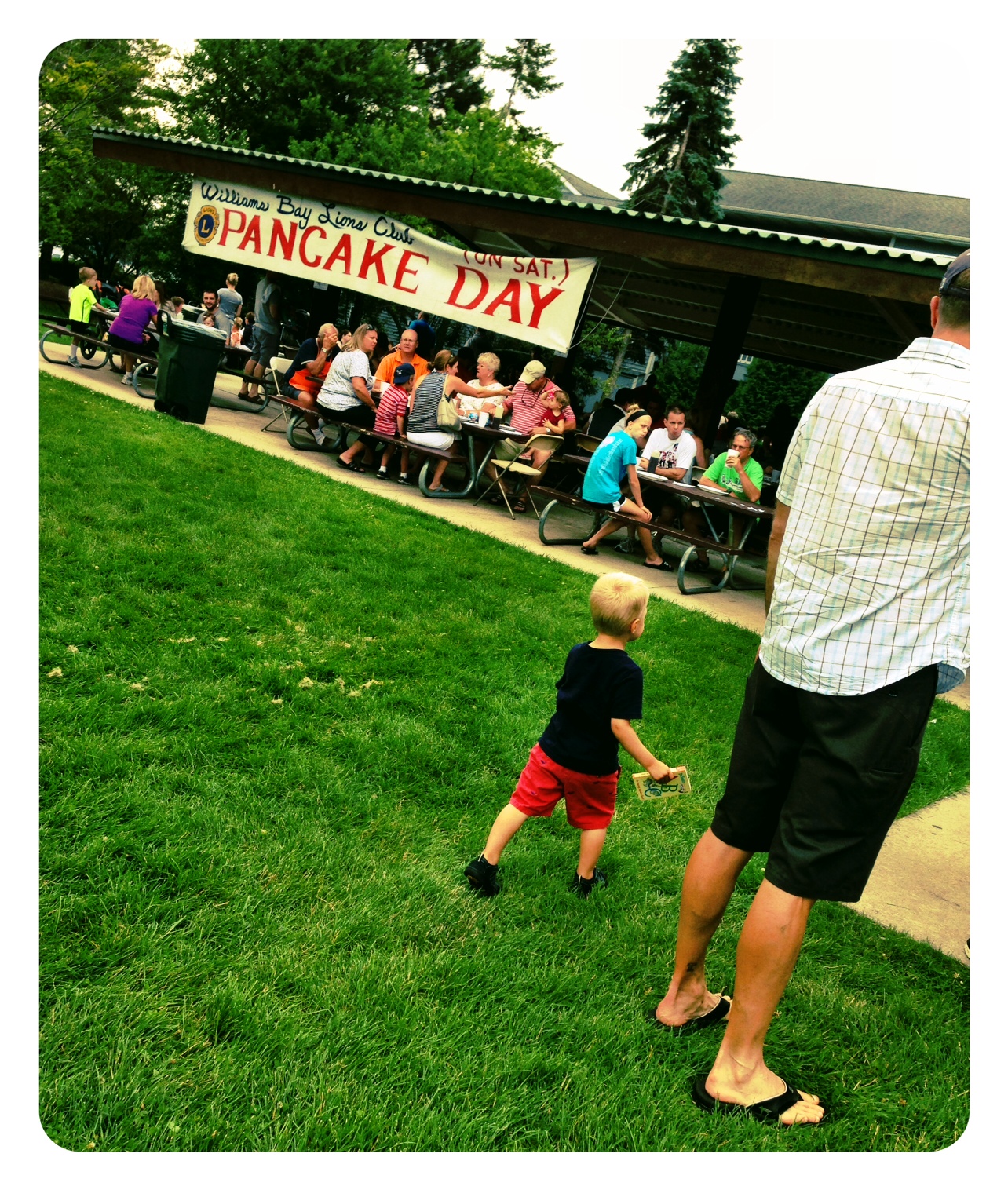 This past week we took our annual family vacation in Geneva Lake, Wisconsin for the 4th of July holiday. I was excited for “vacation” because it also served as kick-off for my triathlon training. I decided after running the Soldier Field 10-Miler in May that I was ready to take my training up a notch and dip my feet, literally, back into triathlons. This will be the first year I will compete in a triathlon since before our journey to conceive children in 2009. 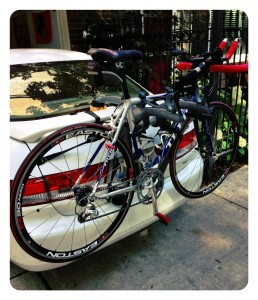 I packed my wet suit, running sneakers, road bike and all the gear that go along with the three sports – plus all the gear that go along with two 3-year olds, including potty training seats. (We definitely need a bigger automobile!) Admittedly I was a little nervous about the car ride and being at Nana and Papa’s place for five nights. The boys are three weeks into potty training, and I was worried there would be a regression and accidents. But I’m happy to report they did great, not one accident all week from either boy!

Tuesday, Wednesday and most of Thursday I had the boys all to myself so it was truly 48 hours of rest for my body. “Rest” defined as no extra curricular exercise outside of caring for and playing with two toddler boys. Rest, right?

My loose training plan for the weekend included at least two bike rides, a run, and a swim in Geneva Lake. I have not been on my road bike regularly post children (maybe 2-3 bike rides every season). And I have not swam for exercise since my last Half-Ironman Triathlon in 2008. Hence my ‘loose’ training plan – whatever I completed would be a breakthrough training week!

The weather on Friday proved to be the best weather day of the whole trip – bright blue skies, minimal wind, and pleasant 75 degree temperature. This was the day we planned our first bike ride. There were five of us going out to ride “50 on the 4th” – my husband’s family tradition. (Yes, I’m married to an active guy; he’s a roadie, a triathlete and marathoner.) I was trepidatious about our long ride. I did not know what to expect of my body, but excited just to be back in the saddle next to my husband for the morning ride. (Nana & Papa were taking care of the boys.) 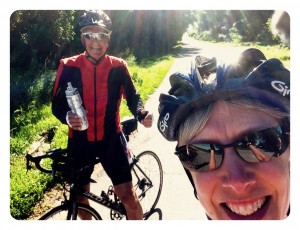 The ride was awesome. What a treat to roll out of your garage and be on rural roads within minutes. My legs felt fine climbing rolling hills, but my back got stiff after 30+ miles, and my tushy a little sore towards the end. We stopped three times for a short break to stretch, refuel, and use the bathroom. We completed the ride in less than 3.5 hours covering 53 miles around the beautiful towns of Wisconsin. By the end of the day Friday my legs and body were quite fatigued. Good thing our only plan on Friday afternoon was to play in the pool and eat!

My goal for Saturday morning was to get in the lake for a swim. I tried to recruit my husband’s aunt who is also registered for the triathlon, but she backed out at the last minute due to the chilly 55 degree air temps forecasted for the morning. I could hardly blame her. I tried to bail on myself too.

The alarm clock went off at 6am on Saturday and my husband and I tipped-toed out of our bedroom where the boys were also asleep in their pack n’ plays. (Yep, our 3-yo are still in pack n’ plays but that’s another blog post in itself). Rather than wear running clothes, I decided to dress in my tri shorts and top and I would bring my swim googles and swim cap to drop-off at the beach on my outbound leg of the run. I figured if I run first, I’d be hot enough to WANT to get into Geneva Lake for a swim, and I would have on the right clothes to do it.

I ran the hilly roads in Williams Bay (the run course for the triathlon is in Williams Bay so this is great training!) and stopped at the beach on the way back to swim. I took off my sneakers, pulled the swim cap over my head, and it tore in two. Of course, why would I expect a six year-old latex swim cap to be useable? Fail. Then I put on my eight year-old googles, again thinking these may not work. The swim will be an attempt at best. I dove into the 70 degree clear lake  water and away I went. My arms moved, my feet fluttered, and my goggles didn’t leak. As I was SWIMMING I thought “oh yeah, this is what I remember. It feels great to be buoyant but it’s also really hard”. My arms were getting tired rather quickly, more quickly than I anticipated. (*Note to self: add more upper body conditioning exercises to workout routine.)

I had 60 minutes to complete the day’s workout. After running for 35 minutes I told myself I’d swim for 10 minutes, get out of the water and run back to my in-laws condo. The Lions Club Pancake Day breakfast tradition was waiting for us. Run, swim, run complete. It was an excellent morning. I felt more accomplished completing a 10-minute swim than completing the previous day’s 50-mile bike ride. I conquered the water! 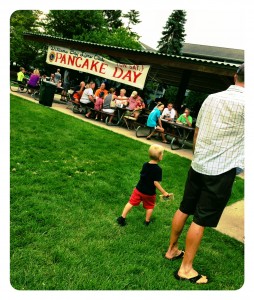 On Sunday at 6am, the alarm clock rings again and my husband and I tipped-toed out of our bedroom to prep for our morning’s workout. As he’s been doing for the last two mornings, he makes a coffee run to the local town store for our caffeine fix. He usually comes back with three 16-oz coffees to be consumed pre- and post-workout (85% for him). On this morning he also returned with a glazed long john donut (let’s not forget, we are on vacation). Mmmm, my eyes lit up with delight. I don’t feel guilty eating something so delicious before a workout especially in Geneva Lake when my MIL always has accessible treats around the house. My husband slices off a small piece of the donut and I slice off a small piece from the opposite end. Bleary-eyed and quiet we both savor each nibble and sip our coffee. My husband picks up the knife and slices the remaining donut into two. After a few minutes of gazing at the remaining pieces, I look at him and ask, “Did you slice those for us?”. “No, they are for the boys. We’re a one-donut family”. “Oh”, and we both continued to stand there in silence sipping coffee. It took me a few moments to process what he just said so matter-of-factly, and I chuckled. Those words coming from my husband – who loves his sweets more than any other male I know – took me by complete surprise. I then moseyed to the other side of the kitchen, toasted a bagel and smothered it in peanut butter and continued to sip coffee.

I chuckled about his comment on our 21-mile hilly bike ride around Geneva Lake. We’re having fun. We may be a one-donut family, but we certainly don’t share our daily ice cream cones while on vacation. 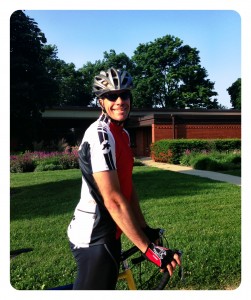 The weekend officially commenced my 10-week triathlon training program. I’m giddy with childlike excitment to race in September and look forward to sharing my training journey with you.